Mauna Kea Technologies located in Paris, France, and inventor of Cellvizio®, the multidisciplinary probe-based confocal laser endomicroscopy (pCLE) platform, today announced the presentation of results from a large, prospective, multi-center trial at the 2018 World Congress of Endoscopic Surgery jointly hosted by the Society of American Gastrointestinal and Endoscopic Surgeons (SAGES) and the Canadian Association of General Surgeons (CAGS), being held April 11 – 14 in Seattle, WA. The presentation was entitled, “Real-Time Diagnosis of Barrett’s Esophagus: A Prospective, Multicenter Trial Comparing Confocal Laser Endomicroscopy with Conventional Histology for the Identification of Intestinal Metaplasia in Novice Users.”

The company reports:  The prospective, multi-center study included 172 patients scheduled for a Barrett’s Esophagus screening or surveillance endoscopy. Random four quadrant biopsy (Seattle protocol) performed under high-definition white light endoscopy was compared to pCLE using Cellvizio and interpreted in real time and after the procedure. The key results were as follows:

Paul A. Severson, MD, FACS, Co-Director, Minnesota Reflux and Heartburn Center said, “Monitoring gastroesophageal reflux disease (GERD) is critical because Barrett’s esophagus is associated with increased risk of developing esophageal cancer.”  He added, “The current standard methodology, the Seattle protocol, is poorly followed and has a very low diagnostic yield. Probe-based Confocal Laser Endomicroscopy is considerably more sensitive, as demonstrated in this study, even when performed by novice users.”

“This large multi-center study confirms that endoscopists can more than double their detection rate of patients with intestinal metaplasia and dysplasia when using Cellvizio, with a short learning curve. This demonstrates once again not only the broad applicability of the technique in clinical practice but also its significance for patient care and cancer prevention,” concluded Sacha Loiseau, Ph.D., Founder and Chief Executive Officer of Mauna Kea Technologies. 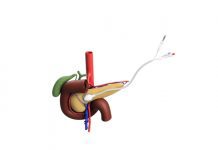