“With the recent CE Mark of Neural Analytics’ Lucid System, we will be enhancing our presence in Europe to allow us to provide our unique technology to European clinicians and their patients,” said Leo Petrossian, Chief Executive Officer of Neural Analytics, “Our system will help clinicians detect brain disorders earlier by accurately measuring the brain’s blood.”

The company recently received CE Mark for its ultrasound device, the Lucid M1 Transcranial Doppler Ultrasound System™ (Lucid System) in January of 2017. The Lucid System is an all-in-one ultrasound system designed for measuring and displaying cerebral blood flow velocities and monitoring of patients with brain disorders. Neural Analytics began selling the Lucid System in Europe in the first quarter of 2017.

The Lucid System is a battery operated medical grade tablet device. It uses a type of ultrasound called Transcranial Doppler to assess the brain’s blood vessels from outside the body. This analysis can be performed in the physician’s office, and can help the physician diagnose brain disorders, potentially without the need for additional, more invasive tests. Many significant brain disorders are caused by blood flow disruption.

Globally each year severe blood flow disorders affect more than 30 million people. Traumatic Brain Injury and stroke contribute the most to the global disease burden for these disorders. Stroke is the second most common cause of death in Europe and about 1.1 million die of stroke in Europe each year. 1 Globally stroke affects about 16 million people and kill an estimated 5.7 million, with an annual U.S. healthcare cost of $104 billion.2,3,4,5 There are 14.8 million people affected by Traumatic Brain Injury globally each year, with 2.5 million in the United States. 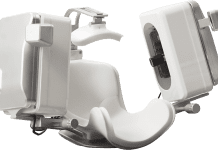