NICO Corporation notes the results of a single study, compiled by Indiana University Health and Goodman Campbell Brain and Spine in Indianapolis and published today in the Journal of ClinicoEconomics and Outcomes Research, revealed an average economic benefit to the hospital of $11,773 per patient for 28 patients undergoing the NICO BrainPath surgical approach, or a net estimated benefit of $329,659 resulting from fewer ICU days and the ability to provide surgery for patients that previously would not have been candidates.

Access the paper and listen to the video abstract here. 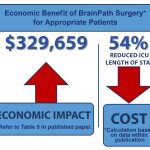 two groups of patients: 208 receiving conventional treatment and 28 receiving surgery using the NICO BrainPathâ for non-disruptive access and NICO Myriadâ for automated, non-heat generating tumor removal and clot evacuation. The paper, Technology that achieves the Triple Aim: An economic analysis of the BrainPath Approach in neurosurgery, compared the inpatient length of stay (LOS) in the ICU by diagnosis-related group (DRG) between the two groups. BrainPath patients underwent a clinical review to determine if they would have received surgical intervention if BrainPath technology was not available.

“Our analysis showed that the surgical option available through BrainPath resulted in economic value for the hospital and clinical value to the patient,” said Sidney Norton, Executive Director of Financial Planning and Analysis at IU Health during the time of the study and now Vice President of Budget and Finance at Cincinnati Children’s Hospital Medical Center. “This clearly supported IU Health’s commitment to achieving its Triple Aim objectives, which has become a standard benchmark for measuring quality improvements and reducing healthcare costs for institutions across the country.

“A very important aspect of this analysis was that it showed bringing new technology into a healthcare system does not always mean additive cost,” added Norton. “In this instance, when using BrainPath, new technology helped us reduce costs. This approach of analyzing the entire episode of care is important when hospital administrators and value analysis committees make technology acquisition decisions.”

Surgical intervention was possible using the standardized BrainPath Approach in 14 cases of intracerebral hemorrhage (ICH) that otherwise would have been medically managed due to the location or size of the ICH, which means a “watch and wait” approach. A statistically significant reduction in ICU LOS from 11.9 days for conventional surgery to 4.4 days for surgical intervention using the BrainPath Approach was seen in this group, resulting in $210,735 less in direct ICU costs when using $2,007 as the average cost of an ICU day. Similarly, surgical resection was possible in 14 tumor patient cases using BrainPath and Myriad, two of those cases would have only been biopsied due to location of the tumors. These patients also experienced an average 45 percent reduction in ICU LOS, resulting in a total net value of more than $329,000 when using the analyzed approach for both ICH and tumor over the 28-month period.

All hospitals are faced with the challenge of managing by department, as well as looking at the healthcare system as a whole. According to the authors of the paper, the goal of their analysis was to look at outcomes across departments in order to make a better system-wide decision on the true value of the technology and to determine if there was overall economic benefit to the hospital system from the adoption of new technologies in neurosurgery.

“Similar financial analyses often focus too narrowly on the cost of a procedure and may overlook the economic value that arises in other areas. This results in a perceived trade-off between improved patient outcomes and higher cost,” the authors state. “Even though the BrainPath Approach increases the marginal cost of the surgical procedure, this investigation’s results show that the procedure cost is more than offset by the reduction in ICU LOS.”

ICU length of stay is a clinically driven metric, representing a source of major healthcare cost and a high value target for cost savings, especially important in the new healthcare landscape where reducing the per capita cost is defined among three areas of importance in Triple Aim, along with improving the patient experience of care and improving the health of populations. The purpose of the IU Health analysis was to evaluate the economic value of the BrainPath Approach – which includes imaging, navigation and optics with NICO’s patented BrainPath and Myriad – in patients with subcortical tumors and intracerebral hemorrhage.

Jim Pearson, president and CEO of NICO Corporation comments on goals:  “Our goal was to provide both clinical and economic value to today’s healthcare market through the development and commercialization of innovative technologies that follow a standardized surgical approach and leave zero footprint behind, and we are achieving that.  He notes, “NICO is the first company in the world to develop technologies that uniquely access the brain through its natural folds, called the sulcus, and then delicately remove the tumor or clot using an automated, non-heat generating tool.

Pearson went on to say, “Using BrainPath and Myriad, we are seeing the beginning of a true revolution in neurosurgery,” Pearson added. “We have achieved the final frontier by providing the last minimally invasive surgery option for the most complex organ in the human body.”

There are nearly 40 peer-reviewed published papers, abstracts and posters showing improved clinical outcomes using BrainPath and Myriad technologies. Pearson said this new paper on the economic benefit of using the BrainPath Approachä closes the loop on Triple Aim objectives by adding to growing evidence using the technologies. “In today’s healthcare environment, these two variables of improved quality and reduced cost commands the attention of the value analysis committee and make our products more attractive.”

On ICH specifically, hospitals have no surgical options supported by guidelines to offer these patients. The cost associated with both care at the hospital and subsequent years of care after the ICH incident can be numbered in the hundreds of thousands, Pearson said. The journal Neurosurgery recently published a multi-center paper including 39 patients demonstrating that use of the BrainPath Approach led to a greater than 90 percent clot evacuation in 75-89 percent of patients and a statistically significant improvement in functional independence for patients suffering from this most costly, deadly and debilitating kind of stroke. Clinical evidence using the BrainPath Approach also earned the technologies and surgical approach a place on the cover of the April 2017 issue of Neurosurgery.

The economic benefits experienced by IU Health using the BrainPath Approach are not unique. “We are seeing the same kind of results replicated in multiple healthcare institutions that put a high value on meeting the Triple Aim guidelines,” Pearson added. “Ultimately, this paper reveals that better clinical outcomes lead to better economic outcomes.”

Nearly 6,000 procedures have been successfully completed using BrainPath at more than 100 BrainPath Centers in the U.S., Canada, United Kingdom and Australia. The BrainPath and Myriad work together as a system using imaging, navigation and intervention to achieve non-disruptive access, automated and non-thermal tissue removal and hemorrhage evacuation, and automated, intraoperative tissue collection and preservation. Growing clinical evidence published by multiple healthcare institutions shows that using the standardized approach and technologies is a key factor in achieving repetitive and consistent surgical outcomes. More than 600 neurosurgeons, residents and fellows in the U.S. are trained on BrainPath.

Editor’s Note:  To learn more about BrainPath and other technologies used in the BrainPath Approach, visit NICOneuro.com, follow news updates on LinkedIn, and view surgical videos and patient stories on YouTube at NICOneuroCorp.