The INTREPID study evaluated 292 patients at 23 sites in the U.S. and successfully met its primary and secondary endpoints. The data, which supported the recent U.S. FDA approval of the VERCISETM DBS System for the control of symptoms of PD, demonstrated the safety and effectiveness of one of the most innovative additions to the field of DBS in 30 years. DBS is used to treat the symptoms of PD, a degenerative condition that affects more than one million people in the U.S. and 10 million worldwide.1

Highlights of the one-year results include:

“This study meets a new level of rigor in evaluating the effectiveness of a DBS system,” said Jerrold Vitek, M.D., Ph.D, McKnight professor and chair, Department of Neurology, University of Minnesota Medical School and coordinating principal investigator for the INTREPID study. “The double-blind design gives us confidence that the improvements in patients on time with good symptom control, as evaluated by the diary data, are an objective measure of the outcomes and suggests patients will benefit from the Vercise System.”

DBS works by stimulating a targeted region of the brain through implanted leads that are powered by a device called an implantable pulse generator. The Vercise System is based on a foundation of cochlear implant technology and works by allowing the physician to independently control the amount of current delivered by each of the eight electrodes on the implanted leads; this proprietary technology is known as multiple independent current control. The Vercise System technology is designed to address patient needs and the progressive nature of the condition with a battery life, depending on individual use, of more than 15 years and stimulation that can be adapted as the condition progresses. 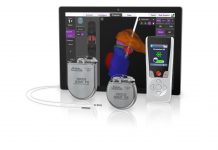 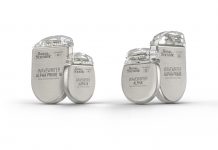