Why is it happening now?

Applications of Artificial Intelligence (AI) in healthcare have accelerated in the past 5-10 years due to hardware development driven by manufacturing, automotive and gaming industries. Affordable CPUs, GPUs and cloud services have made research in AI available for many laboratories and start-ups, enabling a surge of initiatives and new developments.

In parallel, a variety of display technologies providing augmented reality experiences – gathered under the “XR” acronym – accelerated as the hardware has improved. In Virtual Reality (VR), already a consumer technology for video games, users are being immersed in a parallel universe. In Augmented Reality (AR), users are superimposing images on the actual perception of our environment by human eyes using transparent glasses, pseudo 3D display using new generation of screens or holography.

AI and XR progress promise to bring a number of healthcare fields to the next level, which benefits both doctors and patients. Medical imaging is one of the main applications, as radiology images have been digitized and standardized for decades, as opposed to clinical biology, pathology, or patient history data to name a few.

AVATAR MEDICAL was created at the intersection of AI and XR to provide surgeons with a new perception of medical images. It unlocks the power of the information contained in CT scans and MRIs at every step of the patient workflow, from the surgical strategy choice, to the operating room and the patient follow-up.

For the past 10 years, a large variety of techniques have been developed to visualize vascular structures. These techniques differ in the underlying volume rendering technologies, the necessary preprocessing steps, the computational effort required to create the visualizations, the accuracy with respect to the underlying image data and the visual quality of the result. In this context, AVATAR MEDICAL has developed a new VR medical solution that generates 3D patient representations based on their 3D medical images in an interactive VR context. It provides a rich and  instantaneous visualization experience while being entirely local, not requiring massive computing capacity.

At AVATAR MEDICAL, we deeply believe that surgeons know what they need to see, and that algorithms optimizing rendering should not be fully automated. Surgeons must have the possibility to easily and instantly adjust visualizations to their needs. AVATAR MEDICAL offers a complete solution adapted to the needs of surgeons: a minimal interface boosted by AI-powered filters allowing them to rapidly see what they need to see..

What are the benefits for cardiovascular surgeries?

Patient-specific 3D anatomical models are the surgeon’s pathway to better surgical outcomes. It leads to the de-escalation of treatment, time savings, safer surgeries and better communication with the patient.

Better surgery preparation using enhanced visualization techniques can help the de-escalation of treatment and lead to a quicker recovery for patients. In effect, surgeons can more confidently choose conservative treatments. AVATAR MEDICAL technology was used in an oncology clinical case where it supported a conservative partial mastectomy decision. For vascular surgery a better visualization is expected, for instance, to enlighten the decision between endovascular or open surgery. 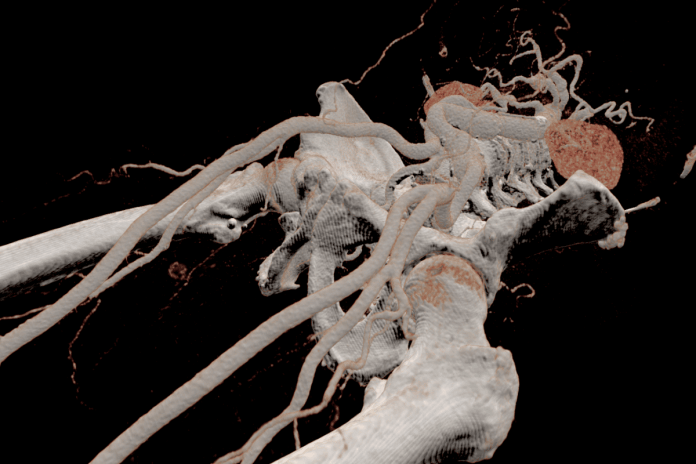 Using AVATAR MEDICAL’s patient-specific models based on MRI or CT scans is both quicker and safer. It avoids the need to scroll back-and-forth through image slices and trying to mentally visualize often complicated 3D structure, by replacing it with a 3D image instantly generated and observable both on flat screens (desktop, laptop, tablet, smartphone) and in VR. With VR, surgeons can gain the benefits of seeing the anatomical information in stereoscopic 3D as opposed to flat computer monitors. This is a clearer representation of what the surgeon expects to see in the operating room. It leverages the extraordinary capacities of the human visual cortex, which evolution has made capable of interpreting and remembering complex real-life 3D morphologies, even when incomplete or noisy. The surgeon can observe complete anatomic details in this highly natural environment, including the spatial relationship between organs and their detailed internal structure by virtually entering them. Vasculature, neoplasms or in situ anomalies within specific structures can be explored.

After using AVATAR MEDICAL’s VR visualization, surgeons report a better memory retention of the image. The image can also be made available to them on displays in the operating room. After the procedure, pre- and post-operative visualizations can be compared in desktop 3D or VR. Finally, such models are powerful to share cases at conferences, and to accelerate the training of residents and fellows. In a recent publication in the Journal of Clinical Oncology, we show that residents get almost the same results as experienced surgeons in terms of surgeon proficiency in reading MRI examinations.

In the same publication, we showed that we could significantly gain time in surgery preparation: surgeons were on average 4 times faster in reviewing MRIs using AVATAR MEDICAL technology versus the standard viewer of their Picture Archiving Communication System (PACS). The time savings incurred could add up to several hours in the case of very complex surgeries where interdisciplinary discussions are needed. Our users indeed report improved collaboration between specialists (e.g.,  between radiologists and surgeons during tumor board reviews), and less back-and-forth to make a decision. We are currently engaged in studies to demonstrate gains in average surgery time for complex procedures, which is an important cost component, and also means a longer anesthesia for the patient. Ultimately, the goal of this next generation patient-specific understanding of the pathology is to safely choose less invasive surgeries and in so doing generate less complications and re-operation rates. This directly translates into lower costs for the healthcare system by avoiding some rehabilitation or rehospitalization costs.

Three dimensional visualization will enable better communication with patients. Surgeons will spend less time preparing surgeries and discussing with radiologists, leaving more time to explain the procedure and its results to their patients. AVATAR MEDICAL’s patient-specific 3D models can also facilitate this communication. At the Institut Curie, a renowned French cancer centeParis, Dr Marie Osdoit reported that she managed to convince a patient to get the recommended full mastectomy by using the 3D image generated with AVATAR MEDICAL. Furthermore, 3D can be the key to informed consent. Often, patients who better understand their pathology will better comply with treatments, leading to better outcomes.

Elodie Brient-Litzler has 15 years of R&D and innovation experience at the intersection of math/physics/chemistry and biology/medicine. She is well-versed in transitioning science from academia into products for the industry, as seen in her invaluable work with launching start-ups.

She started her career as a scientist within the French engineering company Bertin Technologies, working on biodetection technologies. She returned to academia and joined Andrew Griffiths’ microfluidics laboratory at ESPCI, where she established and managed public-private R&D projects including the €20 million national “DigiDiag” project dedicated to diagnostics technology. She was an active participant in the launch of several start-ups such as HiFiBiO.

She joined Institut Pasteur in 2015 as deputy CTO in charge of operations, where she fostered the adoption and dissemination of innovative technologies, and managed/reorganized the 150 pers. core facilities. She later moved to the Innovation Office of Institut Pasteur after its creation in 2018. There, she helped to structure a number of academic projects into product prototypes, such as the DIVA image analysis project which led to the creation of AVATAR MEDICAL in 2020.