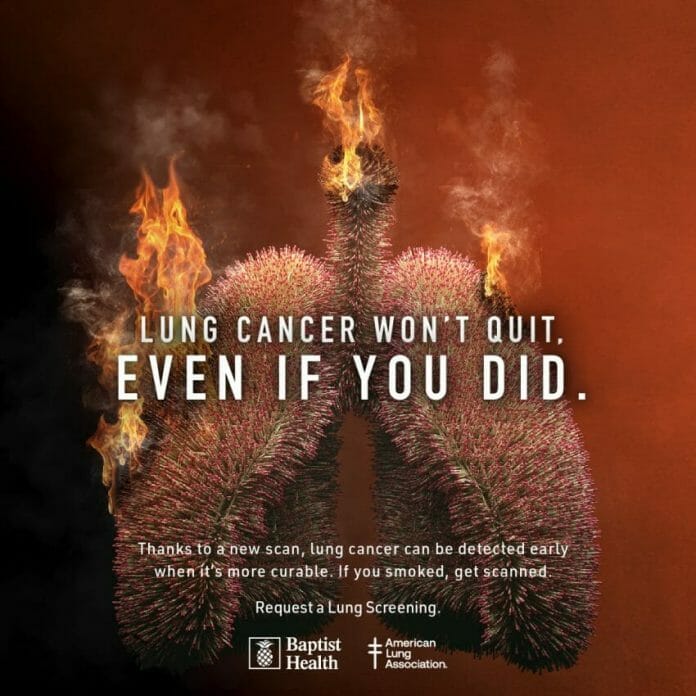 Today, Baptist Health South Florida and the American Lung Association announced they will extend their partnership to raise awareness for lung cancer screenings through the proven and successful “Saved by the Scan” campaign. This partnership was created in 2021 and is the first of its kind bringing together a large healthcare organization and the American Lung Association.

“The significant increase of lung cancer screenings at Baptist Health is a true testament to the demonstrated commitment made by Baptist Health and the Lung Association,” Dr. Mark J. Hauser, chair of the South Florida Local Leadership Board for the American Lung Association, pulmonologist and president of medical staff affairs for Baptist Health. “While this partnership continues to evolve and the results have exceeded our expectations, there is still so much more work to be done to shine a light on the value of early lung cancer screenings.”

“Many people aren’t aware that with a quick, painless and safe test, they can be screened for lung cancer,” said Manmeet Ahluwalia, M.C., deputy director, chief scientific officer and chief of solid tumor medical oncology at Baptist Health’s Miami Cancer Institute. “We are glad that more people at risk are taking advantage of this test.”

According to the American Lung Association, lung cancer is the leading cancer killer. The “Saved by the Scan” campaign is a public service advertising program aimed at educating Americans about the groundbreaking lung cancer screening for those at high risk for the disease.

“In the past, 60 to 70% of lung cancer patients weren’t diagnosed until the cancer was advanced,” Dr. Dylewski said. “With the implementation of screenings, we are catching more patients in the earlier stages where surgery can have a bigger impact. If lung cancer is caught before it spreads, the chance of surviving five years or more increases to over 60%.”

The campaign targets the millions of people who are at high risk for lung cancer and should talk to their doctor about getting a low-dose CT scan lung cancer screening. A person is considered high risk for lung cancer if they are between 50–80 years old, have a 20-pack year history of smoking (this means 1 pack a day for 20 years, 2 packs a day for 10 years, etc.), and are a current smoker, or have quit within the last 15 years.

“In Florida, it is estimated that 19,560 people will be diagnosed with lung cancer and 10,440 will succumb to the disease in 2022. Lung cancer screening is the only way to detect the disease at an early stage when it is more curable,” said Chrissy Cohen, executive director for the Lung Association in South Florida. “Unfortunately, only 3.4% of people in Florida who qualify have had a lung cancer screening. This is why this partnership is critical to raise awareness about this lifesaving screening.”

The screening is available throughout Baptist Health. For eligible patients, Medicare and most private insurance companies cover the screening cost so it is free to the patient.