BEAR Implant FDA De Novo Approval grants Miach Orthopaedics marketing approval for the treatment of anterior cruciate ligament tears, one of the most common knee injuries in the U.S. 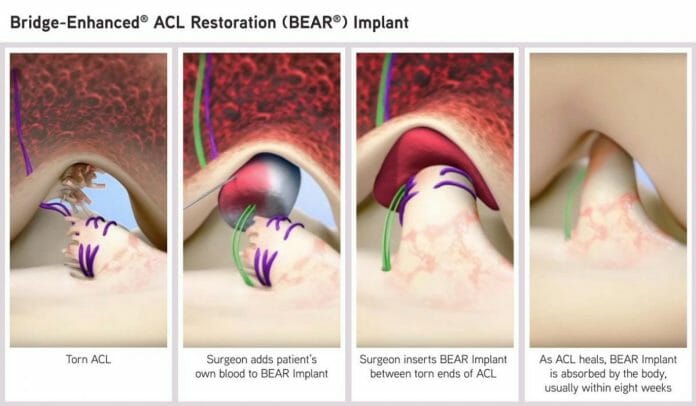 BEAR Implant is the first medical technology to clinically demonstrate that it enables healing, or restoration, of the patient’s torn ACL. This new approach is a paradigm shift from the current standard of care – reconstruction that replaces the ACL with a graft, and is the first new treatment for ACL tears in more than 30 years.

“ACL injuries are all too common among athletes of all ages and can be a career-ending injury in the NFL, which is why the NFL Players Association has been a sponsor of the BEAR clinical trials since the beginning,” said Sean Sansiveri, vice president, National Football League Players Association. “We’re gratified to have supported Miach Orthopaedics in the journey to bring a better option for treating ACL injuries to patients in the U.S.”

Every year, approximately 400,000 ACL injuries occur in the U.S. A torn ACL does not heal on its own, resulting in ACL reconstruction being one of the most common orthopedic procedures in the U.S. Yet the procedure has many drawbacks; many people are unable to return to the same level of daily activities or sports.

“There are a number of advantages to repairing a ligament instead of replacing it. That is why, more than 30 years ago, we set out to find a way to help the ligament heal itself,” said Martha Murray, M.D., founder of Miach Orthopaedics and professor of orthopedic surgery at Boston Children’s Hospital/Harvard Medical School. “We’ve been encouraged by the results of the clinical studies at Boston Children’s Hospital showing that repair using a BEAR Implant is a viable alternative to autograft ACL reconstruction. FDA approval validates the decades of work our teams have put into this technology and is truly rewarding. We are looking forward to seeing this technology become more widely available for patients everywhere.”

The proprietary, bio-engineered BEAR Implant facilitates healing of the torn ACL and has several benefits over ACL reconstruction: It restores natural anatomy and function of the knee, is less invasive, and has better patient satisfaction in terms of readiness to return to sport and one-year pain and symptoms. The BEAR Implant does not require a second surgical wound site to remove a healthy tendon from another part of the leg, or using a deceased donor’s tendon that requires special storage and handling requirements.

“Preserving a patient’s native ACL instead of replacing it with a graft has long been a goal of surgeons, and before the BEAR Implant, multiple approaches were studied and failed,” said Martha Shadan, president and CEO, Miach Orthopaedics. “The BEAR Implant, which is the first medical technology to show that it enables a patient’s own torn ACL to heal, represents the first substantial advancement in the treatment of ACL tears in decades and has the potential to change the standard of care.”

Magnetic resonance imaging (MRI) indicated that the BEAR Implant facilitates healing of the native ACL so that, at two years, its size, geometry and tissue composition are more similar to native ACL tissue than autograft. Pre-clinical studies suggest that the BEAR Implant may reduce the rate of osteoarthritis, estimated to occur in 78% of people with ACL tears, but this has not yet been confirmed in human trials.[i]

Miach Orthopaedics plans to conduct a limited market release of the BEAR Implant in early 2021.

[i] Murray MM, Fleming BC. Use of a bioactive scaffold to stimulate anterior cruciate ligament healing also minimizes posttraumatic osteoarthritis after surgery. Am J Sports Med. 2013;41(8):1762-1770.

Source Miach Orthopaedics, Inc.
Medical Device News Magazinehttps://infomeddnews.com
Our publication is dedicated to bringing our readers the latest medical device news. We are proud to boast that our subscribers include medical specialists, device industry executives, investors, and other allied health professionals, as well as patients who are interested in researching various medical devices. We hope you find value in our easy-to-read publication and its overall purpose and objectives! Medical Device News Magazine is a division of PTM Healthcare Marketing, Inc. Pauline T. Mayer is the managing editor.