Dr. Theodore H. Schwartz: 1st Surgeon in the U.S. to Use the Wearable Reveal™ FGS System During Brain Tumor Surgery

Earlier this year, I became the first neurosurgeon in the United States to use the newly developed Reveal™ FGS System during brain tumor surgery. This new wearable system uses advanced specialty lighting and appropriate optical filters to provide the required lighting to perform fluorescent-guided removal of malignant brain tumors, such as glioblastoma multiforme and benign tumors called “meningiomas.” The significant advantage of the Reveal FGS System over using the existing system—which employs a standard microscope—is that surgeons can see a wider field of view with a greater amount of fluorescent illumination while moving quickly and efficiently through the procedure. 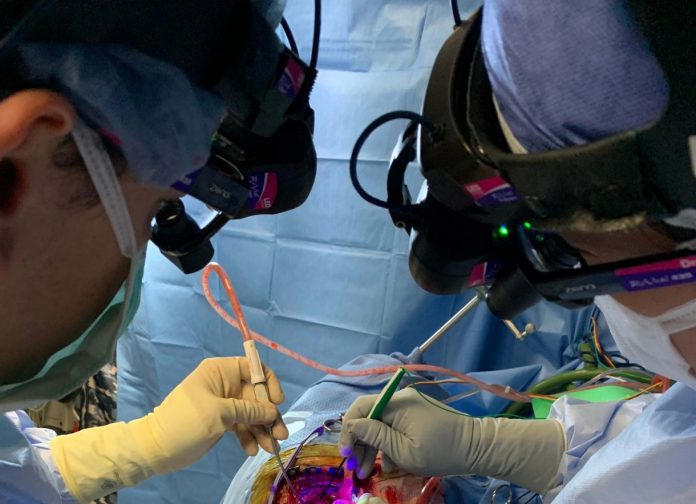 I first saw fluorescent surgery performed back in 1999. I was working in Germany, doing research at the Max Planck Institute in Munich. I took a trip over to a hospital called Klinikum Großhadern and watched Dr. Walter Stummer—who developed this technique—perform this surgery. Dr. Stummer first developed fluorescent guided surgery in 1993 when he discovered that 5-ALA could be used as a fluorescent agent to illuminate brain tumor cells. Dr. Stummer went on to refine the procedure and the technology used to perform it throughout his career, including contributing to the development of the Reveal FGS System.

I’ll never forget the moment when the room lights were extinguished in the operating room and I could see that the tumor cells were fluorescing a bright pink. I knew that neurosurgeons often have a difficult time differentiating tumor cells form normal brain, since the two often have similar appearances. This technology seemed like a game changer and I couldn’t wait until it was approved for use in the USA, having seen it in action already in Germany before most US surgeons. Little did I know that I would have to wait 20 years until the FDA would approve the fluorescent drug—called 5-ALA—for use in the United States.

We had been practicing fluorescence-guided surgery at Weill Cornell Medicine for about three years and had amassed a significant amount of experience from using it on our patients with high-grade gliomas and meningiomas. We found 5-ALA extremely useful because it can often be very difficult to distinguish the normal brain from the infiltrated tumor cells. The fluorescence-guided surgery allows us to differentiate the tumor from the normal brain and to see the finger-like projections of the tumor, which allows us to make our surgeries not only more aggressive, but also more effective and safer.

The principles of fluorescent-guided brain tumor surgery are fairly straightforward. The patient drinks a liquid drug a few hours before surgery. The drug travels into the tumor tissue and specifically stains the tumor cells. When the surgeon is looking down at the operative field—if there is a question regarding the precise margins of the tumor—light of a specific wavelength is flashed onto the field, making the tumor cells fluoresce a bright pink and the normal cells look blue. In its current state, the light is delivered using a microscope, which is a large bulky device that sits on the floor and provides very high-resolution magnification. However, the problem with the microscope in this situation is that oftentimes the surgeon wants to see a larger field of view. Moreover, moving the microscope can be a slow process. Finally, the microscope’s built-in optics reduce the amount of light viewed by the surgeon—so sometimes the fluorescence is muted and not so clear.

The new Reveal FGS System consists of a headlight that produces light of several different wavelengths, controlled with a wireless Bluetooth foot pedal. The surgeon wears the specialized eyewear containing filters calibrated to block the excitation wavelength while allowing passage of the fluorescence wavelengths.  This eyewear incorporates magnification to enhance the surgical field.  Wherever the surgeon looks, just by turning his or her head, the fluorescent headlight points and reveals the tumor. In a few operations, we have compared the microscope illumination with that of the Reveal FGS System—and the FGS system is clearly brighter. We are currently studying the tissue that fluoresces to make sure it corresponds with tumor tissue and are finding that the brighter the fluorescence, the more concentrated the tumor cells are.

The first time I used the Reveal FGS System in surgery, I was amazed by the level of detail it provided. I had a distinct and dramatic impression that the fluorescence outlined the margin of the tumor, which gave me great confidence in correlating my impression from my eyes with the outline granted to me by the stereotactic-guidance system.

I now use the Reveal FGS System much more then I use the microscope to remove high-grade gliomas because I get a better overview of the entire operative field. The fluorescence is brighter and I can also more easily appreciate the normal surrounding anatomy.

I have been extremely pleased with the Reveal FGS System and now use this for the majority of my high-grade glioma surgeries. I recommend the system highly to anyone who prefers portable visualization while operating.