Escaping the “Valley of Death”— The Funding Process for Biotechnology Companies

Innovative biotechnology companies have the potential to transform healthcare, developing new therapies that may improve, as well as extend, the lives of patients.  To deliver on this promise is an epic journey that may take one to two decades, unimaginable amounts of cash, and surviving the notorious valley of death.

It all begins with a discovery typically coming out of grant funded research in academia. The startup is born and oftentimes supported through ‘seed’ funding from friends and family.  The sexiest technologies that elicit exciting promise of new scientific frontiers (think CRISPR) or the next silver bullet that may cure a specific disease (like CAR T-cell therapy engineered for a specific type of cancer) can shoot these new company valuations into the stratosphere.  Venture investors compete to find the next unicorn (companies with a valuation > $1 billion) and are willing to place smart bets on the most promising discoveries.  Despite the fact that these early biotechnologies are unproven with virtually zero clinical data, company valuations soar as they are fueled by a “hope premium” characteristic to the promise driving Discovery Euphoria. 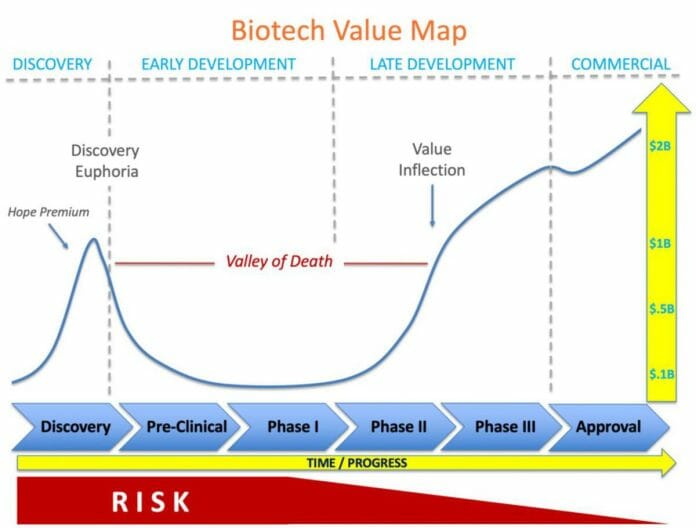 The initial surge of funding for biotechnologies comes right at the beginning, at the discovery stage. At this point, the therapy is still at the benchtop: no animal testing or human studies have been done to prove its effectiveness, and therefore no safety issues have come to light.  Investors at this stage are trading on a “hope premium” that’s based solely on the idea of the potential of the product, since they have no concrete proof on its safety or effectiveness.  Companies may raise tens of millions and recently, even hundreds of millions of dollars at this stage without treating a single patient; however, difficult times are just around the corner.

The “Valley of Death”

Discovery euphoria quickly fades as the company quietly gets to work transitioning from benchtop to pre-clinical (animal) research.  Utilizing its new pile of capital, the company expands by adding people, facilities, and often new targets or technology into the pipeline.  Advancing through pre-clinical studies and then human clinical trials is the major focus.  This early development period is abundant with risk across all fronts that may threaten the feasibility of the technology and even the viability of the company.

The cash begins to flow, or rather to flow out.  Losses accumulate and the amount of cash in the bank evaporates – otherwise described as the burn rate.  There is a constant race to achieve meaningful milestones that de-risk the technology and demonstrate progress to unlock access to the next tranche of essential capital to march forward before the current cash is gone.  This iterative cycle may continue at this stage for five to ten years leading to investor fatigue, shareholder dilution and an increasing cost of capital as valuations often suffer from the long road across the valley of death pitted with the inevitable, often unexpected landmines that can disrupt progress and even risk survival.  Countless carcasses scatter the landscape across the valley of death.  Few survive the gauntlet.

Success in early human safety studies, also known as Phase I or Phase I/IIa trials, may provide a new source of tailwind to push forward, but typically this isn’t enough to elevate depressed valuations as significant risks remain with larger, longer, higher costs trials ahead. The majority of investors and strategic partners wait for results from the next step: Phase II/IIB clinical trials before committing significant capital.

Positive Phase II/IIB clinical trial data triggers a value inflection point that may benefit from two parallel forces.  First, the investor base may expand to include a large new class of institutional investors that invest in late-stage biotech companies.  Increasing demand for and higher trading volume of company stock will increase share price as new investors build a position in the company.  Second, large strategic players are always on the hunt for promising products to add to their portfolio.  Typically, ‘strategics’ look for positive Phase II/IIB data as the entry point for partnership or acquisition, as the risk profile has been substantially reduced.  With a limited number of viable technologies with robust Phase II/IIB data, competition may be intense for high quality product candidates, further driving up value.

Now that the company has successfully navigated the valley of death, management can focus on late-stage trials and prepare for commercialization. The company should be well positioned to secure additional capital or a strategic partner to advance through the final clinical trials to market approval and to deliver on the promise to both patients and shareholders.