Capitainer Enters Collaboration with the University of Florida and Dr. Timothy Garrett

Total Artificial Heart: After a vigorous workout in the gym, Brian attributed his shortness of breath to the intensity with which he had pushed himself throughout his routine. But while Brian would usually recover quickly this time, his shortness of breath worsened and was later accompanied by what he passed off as indigestion. Brian’s condition continued to deteriorate, and by nightfall, the fit-appearing 36-year-old had suffered a massive heart attack that left him in the hospital fighting for his life.

While Brian eventually recovered from his heart attack, he sustained irreversible damage to a significant portion of his heart muscle, requiring a device implant. If it were not for a life-sustaining left ventricular assist device (LVAD) now attached to his heart’s main pumping chamber, Brian would be one of the thousands of unfortunate patients who die from advanced heart failure every year.

The LVAD implanted in Brian operates in parallel with his heart to supply enough blood to his entire body to keep him alive. On the outside of his body, he wears a power system that includes batteries and a small computer known as a controller. Doctors hope the LVAD will keep him alive until a suitable donor heart is found so he can undergo a heart transplant. This may take several months or even a year.

Unfortunately, over time, LVAD patients are at risk of several adverse events, including bleeding as a result of required blood-thinning medication, a blood clot forming in the pump causing it to malfunction, a stroke, kidney failure, and possible infections.

Brian joins about 11 million people in the United States and Europe that have heart failure, a devastating disease that adds over 1 million new cases each year. These latest statistics from the Centers for Disease Control and Prevention prompted VisionResearch Reports to project the global Ventricular Assist Device market size was valued at $ 2.8 billion in 2020 and is anticipated to grow at a CAGR of 20.3% from 2021 to 2030[1].

While mechanical circulatory support (MCS) devices, such as an LAVD, clearly save lives, the quality of life for the patients can sometimes be disappointing due to the risks of complications and the burden of wearing a power supply. Medical device technology has provided us with many advancements to sustain advanced heart failure patients but being alive is only part of the solution. There remains a tremendous unmet need for newer technologies with fewer complications and with features that address the quality of life and not just the quantity.

For the past 20 years, heart disease has remained the leading cause of death globally, becoming an international epidemic affecting an estimated 64.3 million people worldwide[2]

Heart Failure is a chronic, progressive, long-term cardiac condition that often worsens over time, despite optimal medical management. The American College of Cardiology (ACC) and the American Heart Association (AHA) defines heart failure as “a complex clinical syndrome that results from any structural or functional impairment of ventricular filling or ejection of blood.” As the condition worsens, the heart muscle pumps less blood to organs, precluding them from receiving the oxygen and nutrients to thrive. Over time, the quality of life of patients with heart failure deteriorates inexorably.

A standard functional classification of the severity of heart failure patients’ symptoms as they limit their physical activity was introduced by the New York Heart Association (NYHA). Patients with more advanced stages of heart failure (NYHA functional class IIIB and IV) lose their exertional capabilities, and many become bed-ridden and critically ill. Current heart failure therapy starts with optimal medical management using a variety of medications to facilitate the heart’s pumping action. However, as the heart failure disease progresses, medication becomes largely ineffective, and it is often necessary to intervene with a temporary or permanent mechanical circulatory support device or heart transplantation. However, the challenges faced by existing device options are vast – they limit mobility, cardiac output is fixed, and are fraught with adverse events both in the early post-operative period and in the long term.

Currently, Heart transplantation is the most effective therapy for end-stage heart failure and is considered in the medical community as the “gold standard.” However, the shortage of suitable donor hearts significantly limits heart transplants and creates long transplant waitlists. Additionally, the sickest patients are prioritized for transplants, restricting their use in younger, healthier patients who would otherwise live longer.

Mechanical circulatory support helps “bridge” patients while awaiting transplant or serves as a more permanent therapy for those patients ineligible for transplantation. According to the US National Institutes of Health (NIH), up to 100,000 patients in the US per year could benefit from some form of MCS, such as a ventricular assist device or total artificial heart (TAH). Without these interventions, patients with severe heart failure have a bleak outlook. Although a heart transplant would meet many advanced heart patients’ needs, only 5000 donor hearts are available globally each year.

For more than 50 years, cardiac surgeons and biomedical engineers have pursued an artificial heart that can entirely replace natural ones. There have been many attempts with metal and plastic devices that used a variety of pumping mechanisms, but none of these could match the sophisticated performance of the human heart.

In the works and finetuned for the past 20-years, the culmination of that long pursuit came from BiVACOR. 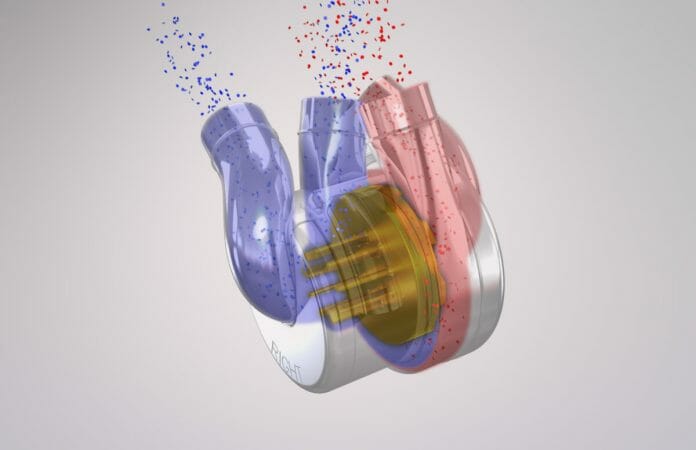 BiVACOR is developing the Total Artificial Heart (TAH), the first long-term therapy for patients with advanced heart failure. The TAH is an implantable rotary biventricular blood pump that uses magnetic levitation technology to replace both ventricles of a failing heart. It can bridge the time to heart transplant or serve as a long-term, more permanent option. The BiVACOR heart fits in the palm of your hand and is only slightly heavier than an adult human heart at 650 grams. It is small enough to be implanted in women and children but also capable of providing ample cardiac output for an exercising adult male.

Unlike most earlier attempts, the BiVACOR design doesn’t mimic the heart’s natural pumping process, with valves that open and close, dispersing blood throughout the body. BiVACOR bases its model on one centrifugal pump that propels a continuous stream of blood in the arteries – no valves. The TAH is of simple construction, comprised of an external casing made of an inert, noncorroding material, titanium, and one rotating disk (rotor) inside that concurrently pumps blood to both the body and the lungs. The rotor is entirely suspended in a magnetic field, the same “maglev” principle that has been used by high-speed trains, providing precise, stable operation with no mechanical wear. The rotor has open impeller vanes on both sides, one larger set pumps blood at the high pressure necessary to send blood throughout the body, and another smaller set pumps blood at lower pressure to the lungs.

The elegant design of the BiVACOR TAH adapts and cooperates with the human body, automatically adjusting to a person’s activity levels. The rotor can pump more than 12 liters per minute per side and more than enough output for patients engaged in moderate exercise. Smart controllers adapt the pump operation to changes in the patient’s activity, sensing the body’s feedback. When a person starts to run, the muscles being used in the legs and elsewhere consume oxygenated blood faster and push the deoxygenated blood back into the vascular system. The increased blood flow into the BiVACOR heart triggers the pump to move more blood from both sides without needing an increase in rotor speed.

The current design of the BiVACOR TAH is anticipated to last up to ten years or more. Patients will carry a 4-kilogram external controller pack that contains two rechargeable batteries, providing about five hours of use with each charge. However, later generations of the BiVACOR system will employ wireless energy transfer, allowing the patients to be entirely untethered for periods of time.

Advanced heart failure often requires device-based therapy, and several new devices are being added to the clinical arsenal in the fight against the disease. The TAH offers several advantages to present ventricular assist devices, including blood flow that can adapt to the changing metabolic demands of an active patient and a unique design that can potentially reduce the current rate of adverse events and enhance the patient’s quality of life. Future system iterations will become smarter, more portable and be connected to the cloud for remote monitoring.

2 19GBD 2017 Disease and Injury Incidence and Prevalence Collaborators. Global, regional, and national incidence, prevalence, and years lived with disability for 354 diseases and injuries for 195 countries and territories, 1990-2017: a systematic analysis for the Global Burden of Disease Study 2017. Lancet 2018;392:1789–1858.