Participants in the index active and crossover active treatment arms of the study showed durable improvement in symptoms of nasal airway obstruction (NAO) caused by nasal valve collapse (NVC) over baseline at 12 months following a single treatment with VivAer®. Previously published three-month results of the randomized controlled portion of the trial demonstrated that treatment with VivAer was safe and superior to a sham procedure.1

“Nasal valve collapse is a primary contributor to nasal airway obstruction, which often lowers quality of life due to symptoms including nasal congestion, headache, sleep disturbance, daytime sleepiness and snoring,” said Joseph K. Han, M.D., professor, chief of the Division of Rhinology & Endoscopic Sinus and Skull Base Surgery, and chief for the Division of Allergy at Eastern Virginia Medical School, who served as the co-principal investigator of the VATRAC clinical trial. “This study demonstrates that treatment with VivAer is a compelling non-invasive alternative for NAO patients and reinforces physician confidence in the consistent and lasting results of this treatment.”

VATRAC, a prospective, multi-center randomized control trial, enrolled 119 patients who had extreme or severe NAO, based on Nasal Obstruction Symptom Evaluation (NOSE) Scale score, with NVC as a primary or significant contributor to symptoms. Patients were randomized to undergo in-office treatment with VivAer or an in-office sham procedure. After primary endpoint analysis and unblinding, 31 patients were eligible for crossover, and all elected to undergo active VivAer treatment. The data included in this publication were collected from 108 patients, including crossovers from the control arm.

“Study after study, physician investigators have demonstrated that treatment with VivAer results in significant, sustained improvements in nasal airway obstruction symptoms,” said Matt Brokaw, CEO of Aerin Medical. “The growing clinical body of evidence supporting the efficacy of VivAer has also contributed to the increased momentum in adoption from the ENT community, and now more than 50,000 patients have been treated with VivAer since it was first introduced in 2018.”

NAO can take a heavy toll on daily life. The most common symptoms include nasal congestion or stuffiness, trouble breathing through the nose, trouble sleeping, and difficulty breathing well during exercise or exertion. NVC contributes to nasal obstruction for 73% of highly symptomatic individuals,2 but is often under-diagnosed and left untreated. This can have a significant impact on a person’s quality of life, as the nasal valve is the narrowest part of the nasal airway and even small obstructions can create an exponential reduction in airflow. VivAer offers ENT physicians a unique, non-invasive and office-friendly option that durably remodels tissue in the nasal valve to address NAO in appropriate patients.

SourceAerin Medical Inc.
Medical Device News Magazinehttps://infomeddnews.com
Our publication is dedicated to bringing our readers the latest medical device news. We are proud to boast that our subscribers include medical specialists, device industry executives, investors, and other allied health professionals, as well as patients who are interested in researching various medical devices. We hope you find value in our easy-to-read publication and its overall purpose and objectives! Medical Device News Magazine is a division of PTM Healthcare Marketing, Inc. Pauline T. Mayer is the managing editor. 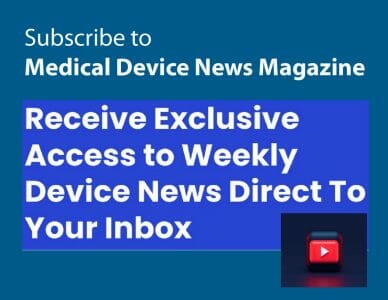 Amber Mauro will oversee Luna’s growth in therapists to 5,000+ exceptional clinicians in 2023, and continue to scale the company’s clinical and market operations.
Load more